Atomic Number of Astatine is 85. 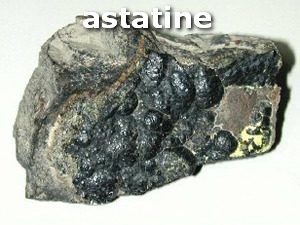 Astatine is a chemical element discovered closer to the middle of the last century by a group of Californian scientists. It is a very unstable and dangerous radioactive element which has got its name after the Greek word meaning unstable. Due to its high toxicity astatine is considered to be really dangerous to human life. It can be obtained in very small amounts in labs and, due to very high instability of this element, it is not easy to maintain it in its stable form. It has no industrial or commercial applications and is used only for research.

What is the Boiling Point of Astatine?

What is the Melting Point of Astatine?

How Abundant is Astatine?

What is the State of Astatine at Standard Temperature and Pressure (STP)?

State of Astatine is Solid at standard temperature and pressure at 0℃ and one atmosphere pressure.

When was Astatine Discovered?

Astatine was discovered in 1940.