Atomic Number of Bromine is 35. 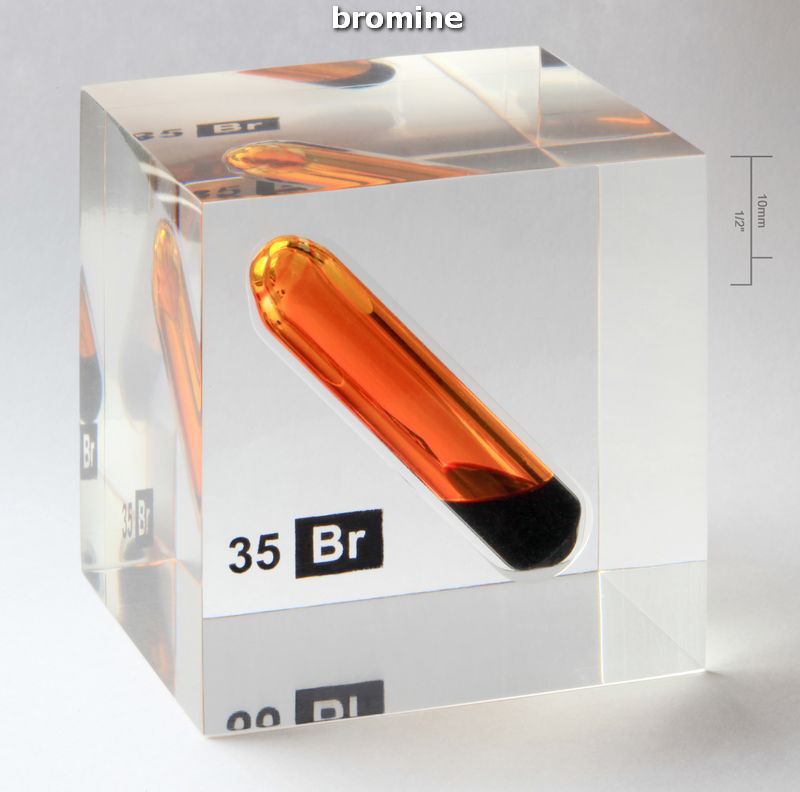 Bromine is a toxic oily liquid of intense red color, known for its strong unpleasant smell. That is why its name comes from a Greek word meaning stench. This chemical element exists in our cells in the form of bromide, but in large doses it has very strong irritating and toxic properties so it should be avoided. Bromine belongs to the group of halogens. In nature, it can be found in some deposits in the soils, which are in abundance in North America and China, as well as in the Dead Sea. This chemical element is used in chemical industry for producing insecticides, pesticides, sedatives, and other chemicals. The compounds of this chemical element are added to various materials to reduce their flammability.

Bromine, a reddish-brown element with symbol Br, is used in making dyes, in pharmaceuticals, in flame-retardants, in medicines, and in agricultural chemicals. Hydrogen bromide, a colorless compound with the formula HBr, is used as a catalyst in organic chemistry. It is also important in the production of inorganic and organic bromine alloys. Tetrabromoethane (C2H2Br4) and Bromoform (CHBr3) are used as liquids in gauges. Silver bromide, a compound with the formula AgBr, is mainly used in photographic films. Bromine monochloride, a compound with formula BrCl, is employed in analytical chemistry and industrial cooling water systems.

What is the Boiling Point of Bromine?

What is the Melting Point of Bromine?

How Abundant is Bromine?

Abundant value of Bromine is 2.4 mg/kg.

What is the State of Bromine at Standard Temperature and Pressure (STP)?

State of Bromine is Liquid at standard temperature and pressure at 0℃ and one atmosphere pressure.

When was Bromine Discovered?

Bromine was discovered in 1826.