Atomic Number of Francium is 87. 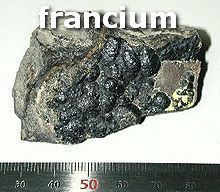 Francium is an extremely unstable and highly radioactive metal discovered in the middle of the last century by a group of French scientists and named after their homecountry. It is very toxic and has no biological importance. It does not exist on our planet in its pure form and can be extracted from thorium and radium ores. It reacts intensively with water. It has no applications and is used only for research.

What is the Boiling Point of Francium?

What is the Melting Point of Francium?

How Abundant is Francium?

What is the State of Francium at Standard Temperature and Pressure (STP)?

State of Francium is Solid at standard temperature and pressure at 0℃ and one atmosphere pressure.

When was Francium Discovered?

Francium was discovered in 1939.