Atomic Number of Gallium is 31. 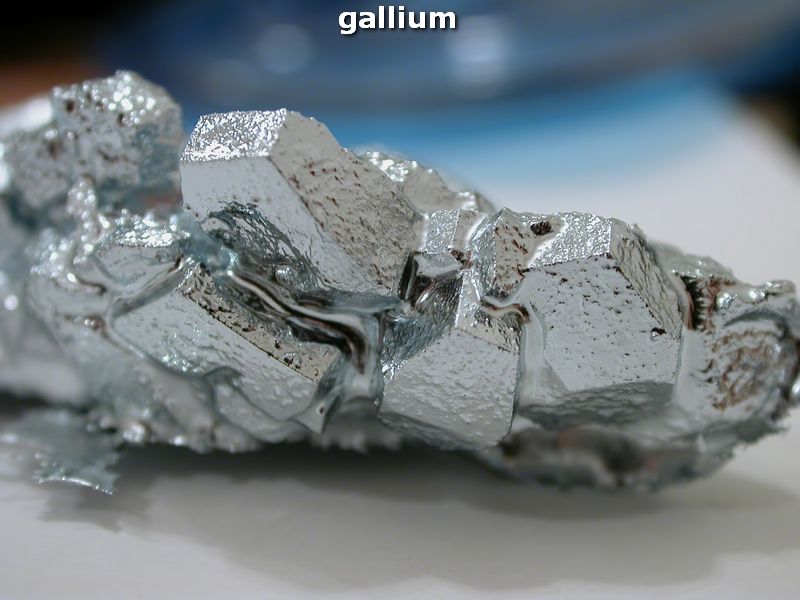 Gallium is a rare and very soft metal of light grey color, which resembles aluminum in some of its properties. It is a semi-conductor. This chemical element has got its name after the Latin name for France, Gallia. It is quite hard to find gallium on the surface of our planet; it can be extracted from some types of coal and bauxites, but in quite small doses. Gallium has no biologic importance and is non-toxic. It makes alloys with many other metals, and these alloys can be used for some parts for mobile phones, light emitting diodes, pressure sensors, etc.

Gallium, a silvery-white and soft metallic element with the symbol Ga, is mainly used in electronics. Most of the gallium produced in the world are employed to make Gallium arsenide. Gallium can be used in pharmaceuticals, radiopharmaceuticals, and medicine too. Gallium compounds are used in rectifiers, transistors, solar panels, mobile phones, and optoelectronic nanosystems. Gallium arsenide, a compound of gallium and arsenic with the formula GaAs, is used as a semiconductor and employed to manufacture LED TVs, lasers, microwave integrated circuits, solar cells, etc. Gallium nitride, an alloy of gallium and nitrogen with the formula GaN, is also used as a semiconductor. It is employed in mobile phones, Blu-ray technology, LEDs, etc.

What is the Boiling Point of Gallium?

What is the Melting Point of Gallium?

How Abundant is Gallium?

Abundant value of Gallium is 19 mg/kg.

What is the State of Gallium at Standard Temperature and Pressure (STP)?

State of Gallium is Solid at standard temperature and pressure at 0℃ and one atmosphere pressure.

When was Gallium Discovered?

Gallium was discovered in 1875.