Atomic Number of Hassium is 108. 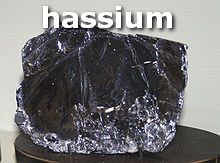 Hassium is one of the newly discovered chemical elements. It is a highly radioactive metal which is very dangerous for living things on our planet and does not occur in nature. It was obtained about 35 years ago by a group of German scientists and named after a province in Germany, Hesse. So far, only a few atoms of hassium have been produced, and this chemical element is used exceptionally for scientific purposes and research.

What is the Boiling Point of Hassium?

What is the Melting Point of Hassium?

When was Hassium Discovered?

Hassium was discovered in 1984.