Atomic Number of Iodine is 53. 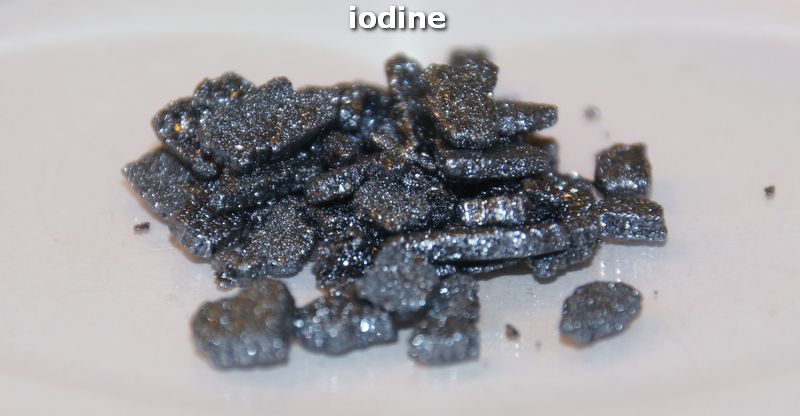 Iodine is a chemical element which usually is presented as dark crystals with violet tint. Thus, its name comes from the Greek word meaning violet. Iodine belongs to the group of so called halogens (along with fluorine, chlorine, and other elements). This chemical element has high biological importance and is essential for normal function of our body, especially thyroid gland. Plenty of iodine can be found in seafood and especially seaweed where the most of iodine is obtained from. Iodine can also be found in some minerals. In many countries, iodine is added to table salt (in small doses) in order to prevent its deficiency. This element forms compounds with other elements like potassium, copper, sodium, etc. Commercial uses of iodine include photography, pharmacology, chemical industry, animal feed supplements, LCD displays, and disinfectants.

Iodine, a chemical element with the symbol I, is used to treat goitre and thyroid cancer in medicine. It is especially employed in various organoiodine compounds. Some iodine compounds are employed in diagnostic radiology, in photography, and in analytical chemistry. Iodine compounds are mostly used as catalysts. They also exploited as disinfectant, antiseptics, stabilisers, dyes, pigments, animal feed supplements, etc. Silver iodide, a compound with the formula AgI, is used in silver-based photography and cloud seeding. It can be used as an antiseptic too. Iodised salt is used as an iodine supplement. To add small amounts of iodine to the sodium chloride salt can prevent iodine deficiency.

What is the Boiling Point of Iodine?

What is the Melting Point of Iodine?

How Abundant is Iodine?

What is the State of Iodine at Standard Temperature and Pressure (STP)?

State of Iodine is Solid at standard temperature and pressure at 0℃ and one atmosphere pressure.

When was Iodine Discovered?

Iodine was discovered in 1811.