Atomic Number of Iron is 26. 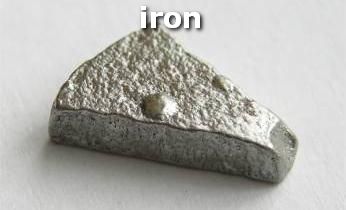 This chemical element is quite abundant, and it is a shiny metal of light silvery color, known for its ability to get rusty as a result of exposure to air and humidity. It is a key metal and it's estimated that up to 90 per cent of industrial metals are iron. It is a non-toxic element essential for all living things, and iron is one of the most abundant elements on our planet too (it is believed that the core of our planet is formed mainly of iron and two other chemical elements). Iron is the basic element for producing steel, which is, in turn, the key material for construction, manufacturing, and other industries. Stainless steel and its alloys with other metals are among the strongest and the toughest alloys, used extensively for producing a large variety of goods, from appliances to bicycles, from cutting tools to jewellery. Iron is also used in chemical industry, as well as an element for producing magnets.

Iron, the most-used and cheapest metallic element with the symbol Fe, is mainly used in the manufacture of steel. It is used in medical and industrial applications as well as in machine tools, automobiles, buildings, pipes, magnets, etc. Ferrous oxide is used as a pigment for glasses, in cosmetics and tattoo inks. Ferric oxide is used for polishing metallic jewelry and treating itchiness. This compound is also preferred in cosmetics. Some iron compounds are used as reducing agent or coagulant, as well as in manufacturing inks, pesticides, and fertilizers. Iron alloys with other elements such as chromium, nickels, vanadium, and manganese.

Iron is also important as a metaphor throughout history, and it plays a role in mythology too.

What is the Boiling Point of Iron?

What is the Melting Point of Iron?

How Abundant is Iron?

What is the State of Iron at Standard Temperature and Pressure (STP)?

State of Iron is Solid at standard temperature and pressure at 0℃ and one atmosphere pressure.

When was Iron Discovered?

Iron was discovered in prehistoric.