Atomic Number of Krypton is 36. 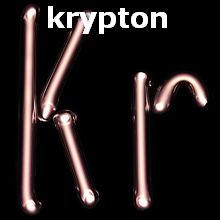 The chemical element which became famous due to a famous comics about Superman (in the form of a mineral), krypton is an odorless and colorless gas. It is a so called noble gas which is very nonreactive and enters the reaction only with fluorine gas. The name of this chemical element comes from a Greek word meaning hidden. This gas was discovered quite recently and it is really very rare in our atmosphere. It has no biological importance. Krypton is used for making light, in light discharge and fluorescent lights. Krypton compound with fluorine is used in chemical industry and for producing lasers.

Krypton, an odorless, tasteless, colorless gas with the symbol Kr, is used as a white light source in photography. And it is mostly used in energy-saving fluorescent lamps. Krypton is widely used for filling incandescent lamps. It can be also used in making luminous signs. Krypton difluoride, a compound of krypton and fluorine with the formula KrF2, is employed as an oxidative fluorinating agent. Furthermore, krpton can be employed in nuclear medicine, in nuclear fusion energy research, and in experimental particle physics.

What is the Boiling Point of Krypton?

What is the Melting Point of Krypton?

How Abundant is Krypton?

What is the State of Krypton at Standard Temperature and Pressure (STP)?

State of Krypton is Gas at standard temperature and pressure at 0℃ and one atmosphere pressure.

When was Krypton Discovered?

Krypton was discovered in 1898.