Atomic Number of Lawrencium is 103. 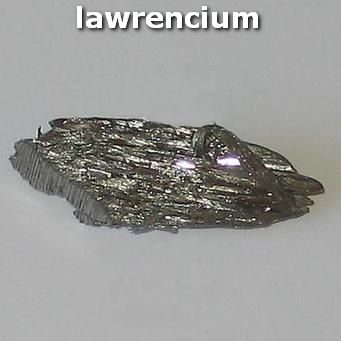 The last one of the actinides, lawrencium is a radioactive metal which was discovered in the middle of the 1960s by a group of chemists of California, as well as by a group of Russian scientists from Moscow. This chemical element has got its name after Ernest Lawrence, an American inventor and nuclear scientist. So far, there are only a few atoms of this element have been created and were used only for scientific purposes. It is possible to obtain lawrencium from californium, in terms of a lab or a nuclear reactor. This chemical element is very dangerous for all living organisms on our planet.

What is the Boiling Point of Lawrencium?

What is the Melting Point of Lawrencium?

What is the State of Lawrencium at Standard Temperature and Pressure (STP)?

State of Lawrencium is Solid(presumed) at standard temperature and pressure at 0℃ and one atmosphere pressure.

When was Lawrencium Discovered?

Lawrencium was discovered in 1961.