Atomic Number of Magnesium is 12. 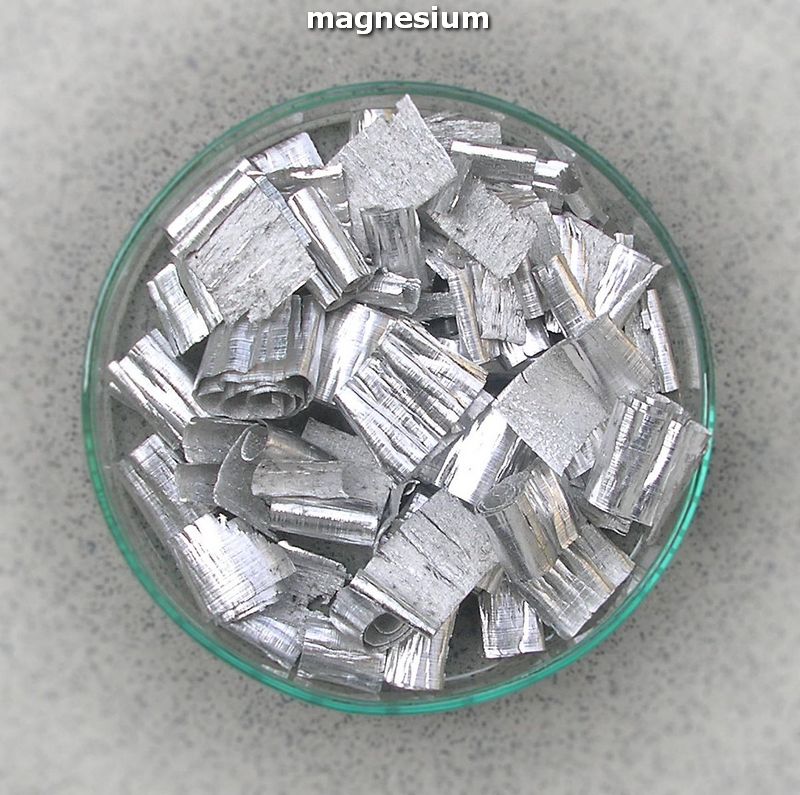 Magnesium is a soft metal of light grey color, which can easily burn with bright fire. Magnesium is an essential element for all living things on our planet since a molecule of magnesium is in every cell of chlorophyll, which is the material for photosynthesis. In human body, magnesium is a compound of various enzymes necessary for correct and smooth chemical reactions in our body tissues. Since magnesium is very highly reactive, it can’t be found freely in nature, but it can be obtained from a number of natural sources, manly such minerals as dolomites, magnesites, etc. It is the 8th most abundant element on our planet. It has a variety of uses, primarily as a light but relatively strong metal, especially valuable for producing various consumers’ goods like suitcases, chairs, laptops, etc. Magnesium and its compounds are used to produce fireworks, as well as in medicine (especially for producing spasms reducing medicines, as laxatives, etc.).

Magnesium (Mg) is the most commonly used structural metal after iron and aluminum. It is especially used in the production of steel and iron to remove sulfur as well as one of the most important construction metals in aircraft and automotive industry. Magnesium is widely used in making mobile phones, cameras, televisions, tablet computers, and laptops.

Its compounds are mostly used in construction, electronics, medicine, and sports. For example, Magnesium chloride, the chemical compound with the formula MgCl2 is used for dust control and ice control. This compound is also used in nutraceutical and pharmaceutical preparations too. It is preferred in the preparation of tofu from soy milk as a coagulant. Magnesium sulfite is used in the producing of paper. Besides, magnesium alloys are very important in the airplane and car construction.

There are some other usages of magnesium as a reducing agent and an additive agent in various industries.

Magnesium is also very important for our body. It helps to convert food into energy, repair DNA and RNA, plays an important role in brain functions, and helps to prevent migraine headaches.

What is the Boiling Point of Magnesium?

What is the Melting Point of Magnesium?

How Abundant is Magnesium?

What is the State of Magnesium at Standard Temperature and Pressure (STP)?

State of Magnesium is Solid at standard temperature and pressure at 0℃ and one atmosphere pressure.

When was Magnesium Discovered?

Magnesium was discovered in 1755.