Atomic Number of Manganese is 25. 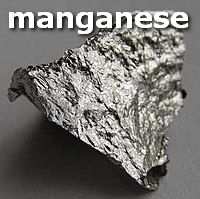 Manganese is a hard light grey color metal, often used in various alloys and known as the key element for electromagnetism. The name of this element is derived from Latin word meaning magnet. Manganese is essential for all living creatures and things as it is a part of a large number of enzymes. We consume manganese with food like nuts, parsley, tea, cereals, etc. This element is known as the fifth most abundant element on our planet, and it can be found on the surface of earth both in soils and in a large number of minerals (a big portion of such minerals in mined in Africa). Manganese can also be found in waters of oceans. This element is usually used in alloys with steel to produce super strong products like rails, prison bars, ruffles, safes, etc. Other common alloys of manganese used to industry are the ones with copper and aluminum.

Manganese, silvery white, hard metallic element with the symbol Mn, is very important in steelmaking and in aluminum alloys. It is used in textile printing, paint, dry cell batteries, drink cans, and fertilizers. Manganese sulfate is used as a reducing agent in the manufacturing of paint and varnish dryers. Potassium permanganate is preferred as an antiseptic or disinfectant. Manganese dioxide is mainly used in dry cell batteries such as zinc-carbon batteries. This compound is also used as a pigment in ceramics and glassmaking. Manganese alloys are also used in organic chemistry, Portland cement mixtures and producing pink colored glass.

What is the Boiling Point of Manganese?

What is the Melting Point of Manganese?

How Abundant is Manganese?

Abundant value of Manganese is 950 mg/kg.

What is the State of Manganese at Standard Temperature and Pressure (STP)?

State of Manganese is Solid at standard temperature and pressure at 0℃ and one atmosphere pressure.

When was Manganese Discovered?

Manganese was discovered in 1774.