Atomic Number of Neodymium is 60. 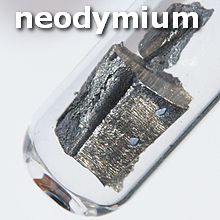 Neodymium is a lanthanide and a silvery white metal, which can be characterized with quite high reactivity. It takes its name from the Greek expression meaning the new twin. It can be obtained from a few minerals and is almost as common as copper or nickel. Neodymium is a mildly toxic chemical element which has no biological importance. It is primarily used in alloys for producing magnets for electric guitars, microphones, speakers, and other musical equipment. Alloyed with boron or iron, this element gives very strong metals which are good for producing wind turbines, some elements of industrial machinery and equipment, etc. It plays a role for producing laser points or UV ray equipment used in medicine, technology, cosmetology, and other fields.

What is the Boiling Point of Neodymium?

What is the Melting Point of Neodymium?

How Abundant is Neodymium?

Abundant value of Neodymium is 41.5 mg/kg.

What is the State of Neodymium at Standard Temperature and Pressure (STP)?

State of Neodymium is Solid at standard temperature and pressure at 0℃ and one atmosphere pressure.

When was Neodymium Discovered?

Neodymium was discovered in 1895.