Atomic Number of Strontium is 38. 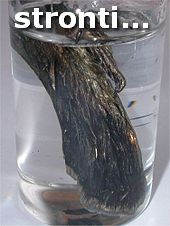 Strontium is an alkaline metal known for its extremely high chemical reactivity. It has got its name after a town in Scotland, Strontian. It occurs naturally on the surface of our planet in various minerals, and a large portion of natural strontium is produced in China. Since the properties of this chemical element are similar to the ones of calcium, there can be a bit of strontium accumulated in living organisms. When this chemical element burns, a salt of bright red color is produced, that’s why it is used for producing fireworks. Strontium is also used in chemical industry and for producing magnets. It is also a by-product of radioactive chemical reactions, and it can be dangerous and carcinogen for human body as a radioactive element.

What is the Boiling Point of Strontium?

What is the Melting Point of Strontium?

How Abundant is Strontium?

Abundant value of Strontium is 370 mg/kg.

What is the State of Strontium at Standard Temperature and Pressure (STP)?

State of Strontium is Solid at standard temperature and pressure at 0℃ and one atmosphere pressure.

When was Strontium Discovered?

Strontium was discovered in 1790.