Atomic Number of Tin is 50. 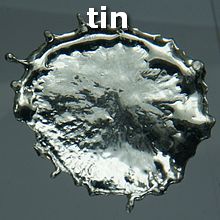 Tin is a post-transition metal which is soft and changes its form at as low as 13 degrees. Its name comes from an Anglo-Saxon word meaning stannum. It can be found in the area known as “tin belt” and also can be mined from a number of ores and minerals occur naturally. Tin is often used in alloys with other elements like copper, lead, zinc, and others, forming stronger and more convenient compounds. By adding tin to steel it is possible to make it less corrosion resistant. This element is extensively used for plating as it easily bonds with iron. Tin is used for soldering and producing superconductive magnets, for producing cans and producing glass, as well as a compound of paintings and dyes for boats, ships, and other water transportation means. Tin should be used with precautions since it is quite easy to get poisoned by this chemical element.

What is the Boiling Point of Tin?

What is the Melting Point of Tin?

How Abundant is Tin?

What is the State of Tin at Standard Temperature and Pressure (STP)?

State of Tin is Solid at standard temperature and pressure at 0℃ and one atmosphere pressure.

When was Tin Discovered?

Tin was discovered in prehistoric.