Atomic Number of Xenon is 54. 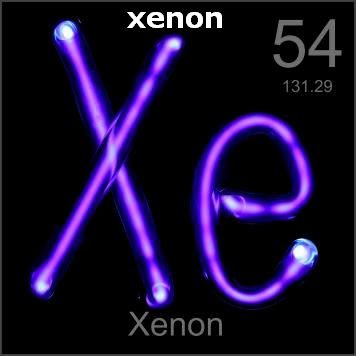 Xenon is one of noble gases, the chemical elements which do not react with other elements easily. It was discovered at the end of the 19th century and given the name after the Greek word meaning stranger. A micro dose of this gas can be found in the atmosphere of our planet. Xenon is not toxic and has no high biological importance. Xenon needs a lot of energy to enter a reaction with other elements, but it forms chemical compounds with a few of them like oxygen, fluorine, etc. Commercial uses of xenon include producing ruby lasers, bactericidal lamps, sunbed lamps, electron tubes, etc. It is used in photography, spacecraft production, cancer treatment, and other fields.

What is the Boiling Point of Xenon?

What is the Melting Point of Xenon?

How Abundant is Xenon?

What is the State of Xenon at Standard Temperature and Pressure (STP)?

State of Xenon is Gas at standard temperature and pressure at 0℃ and one atmosphere pressure.

When was Xenon Discovered?